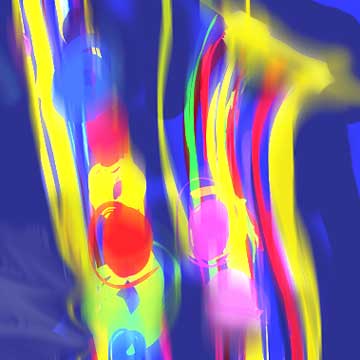 JAZZ POLICE.  (A view from the Berghof)

Guardians of taste and musicality

this ordering of chords a knightly formality.

On every corner, film noir shadows

Hung for all idling strangers to see,

by jack boots born near Near Eastern mangers.

Smothered in Mother, mothered by sentiment,

Music exists for all, except non-penitents.

A past that lives on for a majority of celebrants,

In Miller and Dorsey, Sinatra-like palsy.

The memories that linger long after psalmody

The dead smile, a living leftover from life

And of freedom? ... Sir! Fallen victim to ordered delusion.

Where self-expression once valued, now a minor chord subdued.

Innovation, spontaneity, these clarion calls of the tenor

have simply been suppressed by the trilbies of Vienna!

Once Snow White’s festive bang with Bing on prime-time ice.

And sundry other cultural clichés needing liberation from that talentless malaise.

Ain’t no way my soul’s going back to khaki and braces!

1985, and Miles blew his horn, the synthesizer shrieked and the bass thumbed a storm.

Sooner walk on sand that leaves no traces, following those stars of jazz, lost to inner spaces.

Could those hits from the Berghof be rhapsodic dreams to make a meal of ?

Or `far away eyes` focused on voices heard on high.

Incapable of empathy beyond his own tie, covered in numbers, ‘facts` that can encircle,

the dominant species of hindsight and purple?

Been on that “Lonesome Pine” trail, wolves dressed in Texas smiling fangs that can nail.

The end of this line, beginning for Courtney and Co.

But only in places where brain matter’s discounted.

Oompa and grandma, lederhosen and LaLa.

Perhaps Lennon said it best…a simple, “stick it up your jumPa”

The above reference to the ‘Berghof’ relates to an incident in 2009 when  - at a presentation for Ribble Valley Jazz & Blues at the Chamber of Trade in Clitheroe – our then spokesperson included ‘holiday’ snap-shots from the above place (with all its Nazi connotations) as in some way humorously pertinent to jazz locally! Que puzzlement over this inappropriate symbolism; misrepresentation and finally, alarm! Hence this poetic rebuff.  And fortunately, perhaps, that meeting was very poorly attended.

Music can vitalise our humanity,

Music can nourish our imaginations.

or chords of unknown pianist setting stars upon a face.

We learn to be human-beings through music (the `food of love`, so often compared with)

Or at least that's what they thought at secondary school!

Where suddenly Beethoven blazed through my emptiness,

a spark in the gloom, igniting heroic process.

With vestiges of Romanticism casting a long shadow.

Once, “dedicated to the memory of a great man,”

that “Eroica” moment brought great credit to my teachers;

that left me no-longer fallow.

And later, on Hampstead's ancient Heath,

I spent a perfect day in the company of natures “Pastoral”.

from piano Romanza to clarinet Adagio, and all points in-between,

I danced with a shadowy alter-ego....in and out of sunbeams, drizzle,

Aquarius after-all is the age of wonder,

where unexpected relationships are cemented in laughter.

Music was for “Nightpeople” what a Samba guitar says,

The moon and easy blues, Mingus clapping, “in yo soul,”

“better get it” before tomorrow gets to slam you in a hole!

Ella sang about a house surely to be raided.

Whilst Jimmy Smith on keyboards apologised from within our heads invaded.

It came as no surprise though to find Ellington in “Isfahan”...After the first delightful shock.

And we all lionised Lennon, who imagined a piano that could scream a “Mother” oratorio,

tuned with umbilical wire and angst.

….A stark, tense nakedness – eyes agog in sudden wakefulness – painfully waiting for this tableaux to be broken....

Then in distance heard, “Fireworks”, heralding joyous horns of Handel, that lit-up night as day

in a crescendo of splitting earthworks where dead Kings rose to wish a 'Merry Holiday'.

yet still a wake-up call...to arms and life.

To be followed next morning by something altogether unexpected, as tears of blood evoked by Stravinsky's “Rights of Spring” was to prophesy the sacrifice of youths' floral harrowing (1914 and all that.)

By evening the cloud had lifted, and we swung with Artie Shaw, like troupes through the trees of ease, until one day he swung so high, he gave birth to a “Concerto”.

And a clarinet responding to deeper mood bestowed  rhythm to elated bonobo!

(All of this is quite true)

Later, “Scheherazade” made me realise exoticism is to Europe what nector is to bees.

Importance once considered an escape from cold and sleaze...poverty, repression

(and our “Heart of Darkness”) pierced by 19th century.

– and golden minarets, all suddenly a much closer mystery.

Vibrations that had us dancing on a beach...,

but in England sung on lines of “what a peach!”

“Velcome”, Joel Gray leers in the KitKat club, where “Cabaret” was born amidst Berlin lullabies.

Whispered with honest innuendo from within a club as secure as a leaky ship in a storm.

Expressionist (and to the Nazis, degenerate) as a negro-mask unshorn.

Shortly thereafter David Byrne  took me “to the River”, where I immersed myself in the 80's – and so, born again, I embraced the 'Devils' music and his No.1 Prince of Darkness,

Miles Davis – who never stood still in the glow of yesteryear

but smote tomorrow with tales of “Portia” (and a smiling snarl that said, “I'm HERE”)

An inkling of that magical transformation into butterfly had come earlier with Nina Simone's “I put a spell on you”, which seemed to be the predicted outcome of any encounter with this lady (and certainly of the one I had in Brixton) at that time way ahead of my sensibilities,

but neither far behind a bouquet of lilies,

whose smell froze the serenity of youth; of time and freedom,

which lingered on in tales of “Summertime”, the scent seemed to hover in perpetuity over a sip of golden wine....The predictable outcome though had more in common with some well-worn words from Porgy and Bess, “I've got plenty of nothing and northing’s got plenty for me”

(Gershwin earning my fatalistic gratitude and a toast over jasmine tea)

Gardens – both natural and cultivated – held a tremendous fascination for us, and of their mythological and allegorical origins, we were not oblivious.

An enclosure by day, Delius's “Summer Garden”, is an ode, it seems to me,

to a particularly English experience, of plants, water, colours, and visiting creatures,

that is a 3D painting; a harmony of parts and design very much a work-of-art

(and perhaps more so than stuffy gallery features)

but now need immersing in a numinous installation!...

And of Falla's, “Nightime in the Gardens of Spain”,

perfumed fountains to drive you insane. With wonder.

But all this mention of green-fingered fiction,

agreeable as they undoubtedly are as audible diction

brings us closer to an earthy relationship

and to the urban imperatives of Trans-Atlantic social dissonance.

Viewed as an early morning study, abroad in great-coat, grey and unhurried –

I hum to the splendidly empty, “Spoonful” of Howling Wolf's Chess catalogue – concrete vibes taking me to a Chicago squatter nation – whose squalor  I can only guess at.

Yet whose urgent bass drips with unrepentant protest.., through the falling stars of cold, grey dawn.

The refrain is taken up earnestly, if less pragmatically, by the tongue-in-cheek charisma, and sexually charged persona of Muddy Waters.

because, here at last, Daddy Bear is not growling over a simple issue of taste. Oh yeah!

And then came Dylan, Mr Oblivion. Setting poetry to music most persuasive,

We learnt his songs by heart – and took them there too.

A sort of post-war generational glue.

Then an apocalyptic vision of 20th century Britain was presented at Knebworth one summer eve, where “war for peace” was a field burning, and Hendrix sang of “Watchtowers” along which electricity ran murmuring.

Music? Strange – or perhaps coincidental – how that “Eroica” moment reclaimed me recently, because looking back one could see how that youth had but a short time to linger and sigh.

Now I see myself on that same bridge, spanning a watercourse long since dry.

I've written this in recognition of the influence music (of all kinds) has had throughout an unremarkable but rewarding life.

Paradoxically, as I learn more by listening carefully, especially to the jazz that increasingly claims my attention these days, I sense a deepening of colour and a joyous tempo; colours with sound, sound that is vivid…

.... This is obviously a matter of subjective interpretation, but musicians and composers generally have my greatest respect for making this world a better place.